Bringing You....What's NOT in the Game

According to the Memphis Commercial Appeal, head coach Larry Porter confirmed Monday that Jones has decided to transfer to Memphis. As Jones has already received his degree and will enter a graduate program not offered at Wake, he will be eligible to play immediately for the Tigers in 2011.''http://collegefootballtalk.nbcsports.com/2011/07/12/ex-wake-qb-opts-for-memphis-for-final-season/

Memphis picks up WR from Alabama

After leaving Mizzou at the end of last month, Robert Steeples will reportedly have a new school before the current month comes to an end.

The defensive back confirmed to the Memphis Commercial Appeal Wednesday that he has decided to transfer to Memphis. In late April, Steeples announced that he would be leaving Missouri and playing his senior season elsewhere.

As Steeples (pictured, kinda, bottom left) will graduate from Mizzou this month and will enter a grad program not offered at his former school, he will be eligible immediately to play for the Tigers in 2012.

One of the biggest reasons behind Steeples’ decision to transfer to Memphis appears to be the presence of Barry Odom on Justin Fuente‘s first coaching staff at the school. Odom served as safeties coach at Mizzou before being hired as Fuente’s defensive coordinator late last year.

As noted by the Commercial Appeal, the loss of one of Memphis’ starting corners to a transfer this spring should give Steeples the opportunity to come in and compete for a starting job right away.

During his time at Mizzou, Steeples played in 39 games but started just one of those contests. He was a three-star member of the Tigers’ 2008 recruiting class.http://collegefootballtalk.nbcsports.com/2012/05/17/tiger-of-a-different-stripe-ex-mizzou-db-lands-at-memphis/

I think these restrictions are a little much 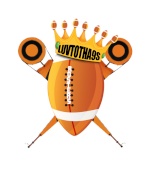 Memphis head coach Justin Fuente announced Tuesday that running back Jerrell Rhodes is no longer with the team and, barring “something drastic,” the first-year coach said he “can’t foresee him coming back this season.”